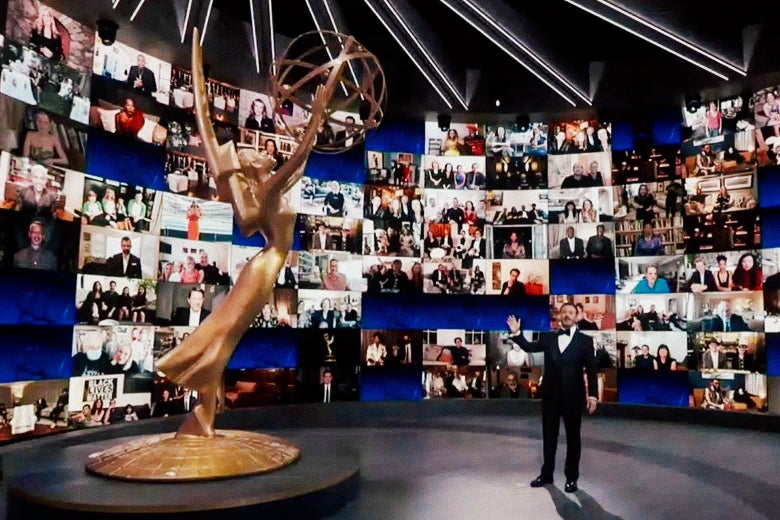 What did stars do without the red carpet?

According to the letter producers sent nominees, the dress code for this year’s Emmy Awards was “come as you are, but make an effort.” In the clarity department, that’s only a step or two above “rustic chic” or “beach formal,” but in a months-long living nightmare that’s prompted an interminable stream of jokes about sweatpants and day pajamas, it felt about right.

Instead of walking a red carpet this year, the vast majority of the nominees and their industry peers broadcast themselves from their homes, or the locations of their choosing, using cameras and ring lights provided to them by Emmys producers. ABC promoted the spectacle as “all the stars and half the glamour.”

That would be a generous appraisal. Without a pre-show strut down the carpet or a crowded program of presenters, skits, and shots of celebrities in the audience, there were precious few opportunities for stars to show off their looks. Unless they won an award or introduced a category from the Staples Center in Los Angeles, where host Jimmy Kimmel presented to a near-empty arena, they rarely got a moment on screen.

Forced into the confines of a glorified Zoom meeting, this year’s Emmys could have been a revelation on the fashion front, especially with the loosened-up dress code. Instead, for the most part, it felt like an extra-boring Hollywood social media feed: a series of images of nicely dressed celebrities, seated in blandly well-appointed living rooms, stripped of all spontaneity. The winners of lots of awards got lots of screen time; the others—the bit players, the losing nominees, the big stars who get invited even if they’re not in anything this year—never got to show off at all, even if they wore something smashing. Since men made up half the acting nominees and more than half the writing and directing ones, there were lots and lots and lots of suits. And since most people were sitting down, there were hardly any full-body shots. Won’t somebody think of the gowns?!

The actors who got time with Kimmel dressed in their usual formalwear. Tracee Ellis Ross, a reliable red-carpet risk-taker, wore a comparatively tame—but no less dazzling—collection of liquid gold ruffles. Zendaya saw your puff sleeve trend and raised you a set of puff hips in iridescent blue (or was it purple?). A kind of shoulder pad/puff sleeve hybrid showed up on Cynthia Erivo, who looked like a vision from a brighter, better future in neon Versace. Laverne Cox was a vision in asymmetrical smattering of sheer panels and what looked like glittering hieroglyphics, the most opulent temporary tattoos.

The evening’s few jolts of festivity came from the actors who, through some combination of COVID testing and quarantining, were able to “attend” (watch? stream?) the Emmys together. The cast of Schitt’s Creek saw their show sweep the comedy categories from a banquet hall in Canada, where they stuck to the black-tie tradition and the black-white color spectrum.
Catherine O’Hara’s outfit included a turtleneck top with long sequined sleeves, taking advantage of her chance to attend an awards ceremony north of Los Angeles. Annie Murphy was laid-back sexy in a suit with an underlayer of lace. Dan Levy reprised his Schitt’s Creek character’s wedding outfit in a Thom Browne kilt with matching soccer socks. If there exists a tux top that can’t be improved upon by a pleated skirt, I haven’t seen it.

Little Fires Everywhere stars and co-producers Kerry Washington and Reese Witherspoon directed their small gaggle of guests to dress in black, white, and gold—a New Year’s Eve palette to bid 2020 goodbye. Washington’s dress did double duty in the adornment category, featuring a sheet of lace covered by beaded fringe. She saw her chance to fancy herself up for the first time in months, and by golly, she took it!

On the flip side, there were a few truly inspired loungewear looks on view. Tituss Burgess, who didn’t win and so barely got a moment in the corner of the screen, sipped from a Solo Cup in his brown satin robe, leaving everything under it to the imagination. Jennifer Aniston, in pink florals, and Laura Linney, in a “VOTE” print, looked robe-cozy, too. Rachel Brosnahan chilled on a couch with three friends, all clothed in silky pajamas. And then there was Alex Borstein, who mugged for her camera from a bed, clad in pink satin and a blonde wig, caressing a small terrier. Would it have killed everyone else to have at least half as much fun with their at-home setups? You’re rich! Get something to caress!

One step even further down the dress-up spectrum were the schlubs of the evening, who dressed like it was just another night in front of the TV. Respect to Stephen Colbert’s fleece vest, John Oliver’s hoodie, and Ramy Youssef’s gingham shirt and ill-fitting baseball cap for making men at home feel ever more justified in refusing to pull themselves together for a special event. (Just kidding, mostly—the casual moments felt humble and sweet, and lent the whole weird, stilted event a little warmth.)

There’s been much talk over the past several months about the irrelevance of pants in the Zoom era. As such, there were a bevy of beautiful blazers at the Emmys whose bottom halves never made an appearance. RuPaul pattern-mixed in what could have been a double tribute to Piet Mondrian and Joan Mitchell. Oprah glowed with benevolence in a curtain of silver beads.
Elton John looked pleasantly unbothered by all this coronavirus hullabaloo in an uncharacteristically understated bit of embroidery.

Elsewhere in blazer-land: Randall Park was smashing in a casual-for-Emmys, dressy-for-Zoom chocolate suit, though he was shown up by an alpaca who was fully nude but for a collar and bowtie. (Where were the censors???) I would have liked to see Yahya Abdul-Mateen’s bigger-than-pin stripes in better lighting than the Emmys ring light, but he shone nonetheless.
Jeremy Strong, in a lost-in-translation interpretation of a bowtie, Zoomed in from a dusty saloon circa 1849.

As expected, the evening’s acceptance speeches included numerous calls to political action. Some actors took the relaxed dress code as an opportunity to make statements on their T-shirts. Uzo Aduba and Regina King honored Breonna Taylor; Sterling K. Brown wore a Black Lives Matter shirt. Aduba and King won the awards they were nominated for, and Brown presented one, so they all got speaking time on Sunday night. But their shirts were a clever workaround for a pared-down awards show. They needed just a moment on screen to get a simple message across, even if, without a red carpet, they didn’t get a chance to speak.

Read more in Slate about the Emmys.

Readers like you make our work possible. Help us continue to provide the reporting, commentary, and criticism you won’t find anywhere else.