Understanding The Real Drivers Of Inflation

There is a widespread lack of understanding among economists and investors regarding what actually drives changes in inflation rates over the short and long term. The conflation between the price of individual prices and the general price level, as well as the focus on aggregate demand, has led to a high degree of misinformation regarding what really drives inflation rates. In this article, we hope to provide clarity on the subject, explaining a number of important concepts:

The definition used by Milton Friedman to explain rising inflation – too much money chasing too few goods – is a good place to start in terms of understanding the long-term drivers of rising prices. The more money that exists in an economy relative to real goods production, the higher prices will tend to be on average.

Looking at it this way, it is easy to see how recessions have the potential to be highly inflationary, particularly if met with aggressive money printing, as is the case today. In fact, periods of high inflation and hyperinflation are almost exclusive to countries experiencing economic contractions. Similarly, persistent deflation almost always occurs amid positive growth, for the simple reason that it is difficult for prices to fall if the availability of goods is declining.

We should also note that “money” in this context does not only refer to cash but also to government bonds held by the public. The fact that the majority of governments can demand their central banks print money to buy their bonds means that government bonds act as a form of money. As John Hussman notes, “Currency and Treasury securities compete in the portfolios of individuals as stores of value and means of payment. The values of currency and government securities are not set independently of each other, but in tight competition.” In other words, regardless of whether a government pays for its fiscal deficit with cash or with a bond, the inflationary impact is more or less the same.

While the ratio of money supply to the size of the real economy provides the foundation for long-term changes in inflation, there are numerous other forces at play. Even during periods of rapid increases in money supply relative to the real economy, inflation pressures can decline, and vice versa. The reason is that individuals can become more or less willing to spend their existing cash balances. The fact that inflation has failed to rise this year despite the sharpest increase in the supply of money relative to the real economy can only be explained by the fact that people have been willing to hold this additional money supply as a store of value.

Bizarrely, the surge in money supply relative to GDP seen this year has literally been flipped upside down and interpreted by many economists as being a disinflationary force. It is argued that declining money velocity – the inverse of the ratio of money supply to GDP – explains the lack of inflation and means increasing money supply will continue to fail to drive up inflation.

In reality, the decline in velocity reflects an increase in the willingness of individuals to hold money as a store of value. While the amount of dollars held by U.S. and overseas residents has increased substantially relative to the availability of U.S. goods production, there has been an increase in the willingness of dollar holders to use them as a store of value. This has prevented prices from rising in proportion to the increase in money supply. The willingness of foreign central banks to hoard dollars to prevent currency appreciation is an example of how increases in the U.S. dollar money (and Treasury) supply have been effectively neutralized, preventing inflation from rising considerably.

However, the money still exists and acts as store of potential inflation for the future, if and when it is spent. Therefore, declining velocity, rather than being a reason to expect inflation to remain low, is reason to expect inflation to rise in the future as money hoarding potentially declines. Put another way, the only way rising money supply relative to GDP will fail to lift inflation is if the recipients of the money continue to expect it to retain its value despite ever-increasing quantities. Ironically, it is this confidence that inflation is dead that has led to the kind of insane fiscal deficits and money printing that all but guarantee its revival.

The Link Between Asset Valuations And Inflation

Over recent years increases in equity valuations have tended to be associated with rising inflation. Rising optimism over the state of the economy tends to cause a simultaneous rise in equity valuations and inflation expectations as asset holders become more willing to spend their existing cash balances when their asset holdings appreciate.

We can see from the following chart the close correlation between equity valuations and breakeven inflation expectations, which are a reasonably accurate predictor of actual subsequent inflation. The correlation between the two markets has been particularly strong during and after market crashes, when fears of deflation and recession cause an increase in demand to hoard cash.

Why Recessions Tend To Be Disinflationary In Developed Economies

Over the past two decades, recessions have been associated with declining rather than rising inflation in developed economies, despite the direct inflationary impact of reduced goods and services production. The reason is that the indirect impact of rising credit stress and declining asset values seen during economic contractions tend to act as a disinflationary force, increasing demand for cash relative to goods and services.

It is worth noting that this has not always been the case. Prior to the turn of the century, both equity market declines and economic contractions were associated with rising inflation. Our sense is that since 2000, higher levels of market liquidity have meant that asset prices have increasingly been seen as a loose form of money. During periods of economic weakness, equity declines have reduced people’s willingness to spend their existing cash balance, acting as a disinflationary force.

High Inflation Is Not Positive For Economic Growth

The positive correlation that has been seen between economic activity and inflation rates across the U.S. and other developed countries over recent years has led mainstream economists to conclude that rising aggregate demand causes both rising growth and rising inflation, and therefore, that low inflation must reflect weak growth, which must therefore be stimulated by policy initiatives.

The unwavering belief among policymakers that higher inflation is needed in order to support economic growth has led them to commit to increasing money supply until growth recovers. In reality, excessive money printing actually undermines growth by allowing politicians to increase spending to deleterious levels and reducing productivity by lowering real interest rates (see “Brace For Sub-1% Long-Term Growth”).

Why Recessions Tend To Be Inflationary In Emerging Market Economies

Unlike in the case of most developed markets, in emerging market economies we routinely see slowing or negative growth and asset price weakness occurring alongside rising rather than falling prices. Historically high levels of inflation are often ingrained in the minds of citizens of emerging markets, meaning that there is much less of a tendency for them to hold their currency as a store of value. During times of economic weakness, residents have a strong tendency to either convert their local currency savings into dollars or gold, or simply bring forward their purchases of goods and services in anticipation of higher prices, thus resulting in higher inflation.

This is not only true at the individual level but also at the policy level. Central banks across emerging economies continue to accumulate dollars and other reserve currencies as way of preventing appreciatory pressure on their currencies and building up a defense against future economic shocks. In doing so, they are effectively importing inflation from developed market economies.

The Crucial Difference Between The U.S. And Japan

The surge in government debt and money supply relative to real GDP in Japan over recent decades is often seen as evidence that the U.S. will continue to experience low inflation rates, as has been the case in Japan. However, there is a crucial difference between the two countries; one is the world’s largest creditor nation, and one is the world’s largest debtor nation.

Japan boasts a net external assets position of over 70% of GDP, which has acted as a large and constant disinflationary force owing to the large amounts of dividend and coupon payments that Japanese citizens have earned on their overseas assets relative to what they have paid on their overseas liabilities. Japan’s net income account surplus is equivalent to 3% of GDP, which reflects overseas demand for Japanese yen, partially offsetting the impact of rising money supply. 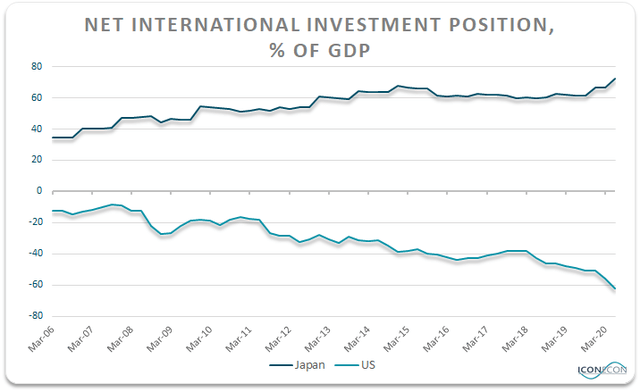 In contrast, the U.S. has a net international deficit of over 60% of GDP owing to decades of current account deficits. The much lower rate paid on its liabilities (mostly government bonds) compared to what it receives on its international assets (mainly FDI) allows the U.S. to run a small primary income surplus of around 1% of GDP. However, the problem is that in order for its primary income surplus to remain positive domestic, real interest rates must remain negative, which itself undermines the demand to hold the dollar as a store of value.

While Japan’s net overseas assets act as potential demand for Japanese yen in the event that these assets are repatriated, the U.S.’s liabilities act as potential supply of U.S. dollars in the event that overseas investors begin to divest. The fact that the U.S. has enjoyed the luxury of being the world’s reserve currency has left the dollar increasingly beholden to foreign investors, particularly foreign central banks.

Disclosure: I/we have no positions in any stocks mentioned, and no plans to initiate any positions within the next 72 hours. I wrote this article myself, and it expresses my own opinions. I am not receiving compensation for it (other than from Seeking Alpha). I have no business relationship with any company whose stock is mentioned in this article.