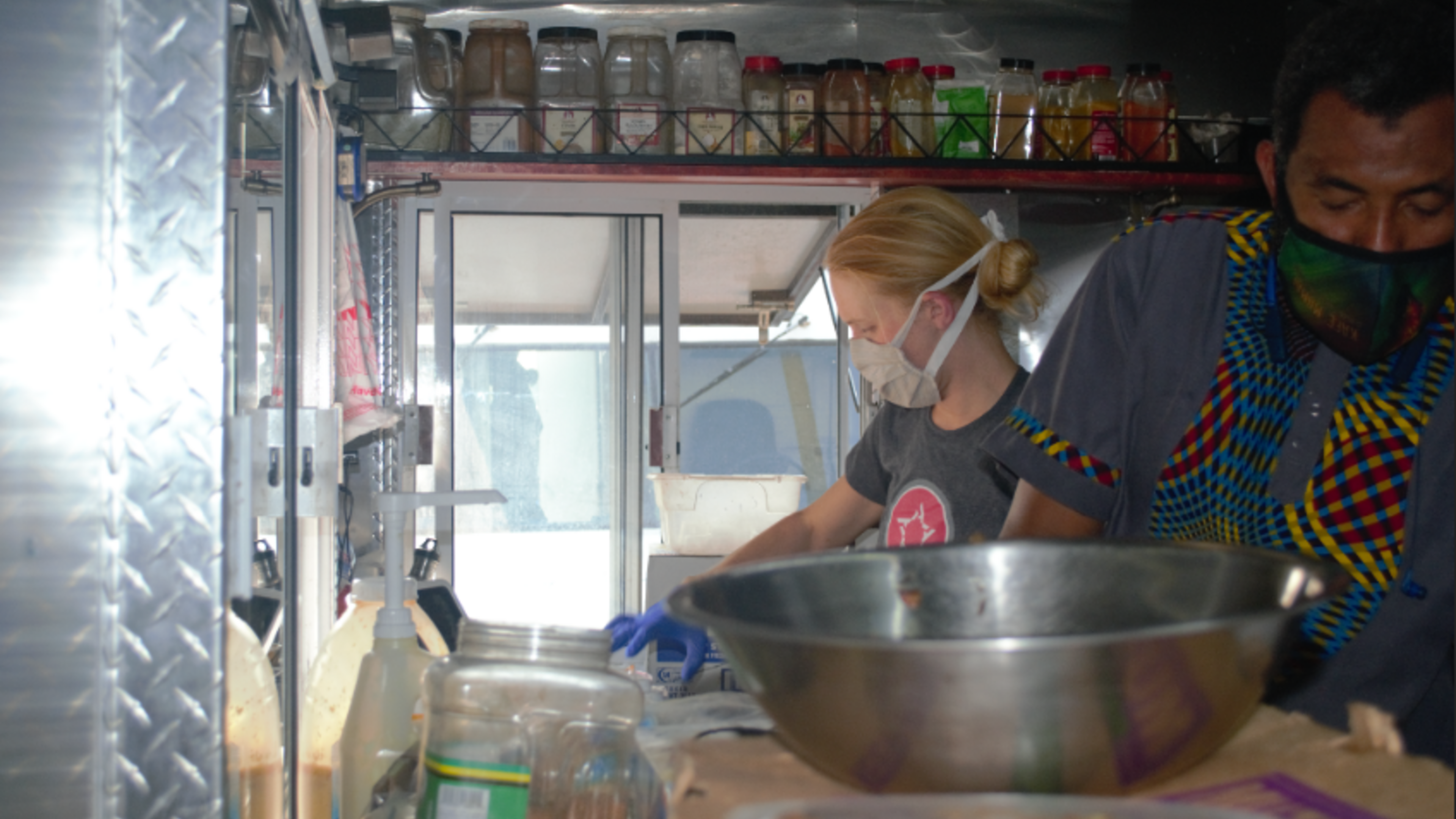 Meals center on our culture, our ideas of home and family, they open up the community to a broader table. Sitting down to eat together can be powerful. Of all the questions that come up when opening a food business, though, Abudu of Kafé Mamai acknowledges that ’why’ is the most complex. For Abudu this may be especially true. While he loves to share his “culture and experience,” he is also passionate about using his small business to support others in his local community and around the globe. In August, Abudu worked to organize a fundraiser in support of Yemeni children.

Abudu, like several others who are aware of the Yemeni crisis, has felt called to action. Yemen lies at the center of concurrent crises. While war threatens the lives of citizens, cholera and the coronavirus remain critical concerns as well. Two-thirds of the population are at risk of starvation. The risk of famine and hunger in particular spurred Abudu to begin raising money for Yemeni children to support efforts to increase access to food.

“I come from a culture where it doesn’t matter where you’re from,” Abudu shares. “You always show hospitality. Even if you’re not eating, if someone comes here as a guest, you feed them.” In this case, Abudu is feeding people locally in order to feed families halfway across the globe.

Abudu originally lived in Lamu, an island off the coast of Kenya, significant in Swahili culture and history and noted for its distinct architecture. He has lived in the states since 2001 and moved to Utah in 2016, where he quickly joined the Spice Kitchen Incubator program. He officially launched his food truck in 2019.

“I like that his cuisine highlights his experience and travels,” Kate Idzorek, the Spice Kitchen Incubator program manager, says of the Afro-Caribbean influenced business. Abudu works to constantly improve Kafé Mamai, but he also dedicates time to the well-being of other entrepreneurs by checking in on them. “He’s a shining star,” Kate says. “He advocates for himself and others.”

When Abudu first pitched the fundraiser last year, he started it as part of Spice To-Go, a hot meal pick-up service facilitated by Spice Kitchen Incubator. The staff at Spice Kitchen were eager to support his idea. This year, he wanted to do more: “Because [coronavirus] has taken over everything else, we don’t talk about things like Yemen,” he says. “It’s not that these things don’t happen [in the U.S.], too,” he explains, talking about hardship experienced in the U.S., like homelessness and hunger. “But it’s different. Worst comes to worst, we have resources.”

All of the profits that Abudu earned during the fundraiser went towards the humanitarian crisis in Yemen. To further the reach of the fundraiser, he organized other food truck owners to come together for the cause. Sobe Eats, Pinyon Coffee, and Hayat’s Grill—another Spice started food truck—joined Kafe Mamai at Sugar House Plaza. Additional food trucks gathered in solidarity at a second location in the valley. Together, they worked to spread awareness of the crisis in Yemen while feeding the community.

Although hoping for the best, Abudu began organizing the fundraiser without expectations. For Abudu, the matter was simple. “[It was] purely, you have kids, I have kids, this is what’s going on,” he explains. Even in the middle of the global pandemic, as many local community members face new hardships and challenges, the effort collected over $3,000 in support of Yemeni children. He believes the great turn out of support is evidence of how serious the crisis is. “People show up and want to help, despite everything happening in their lives. This assures me I live in a good community,” Abudu says.

Abudu reminds us of what it means to come together as a community, not only on the local scale but the global as well. His work helps us recognize that distance and borders do not separate us from each other.

Learn more about the International Rescue Committee’s work in Yemen to provide relief and aid to communities faced with the crisis here.