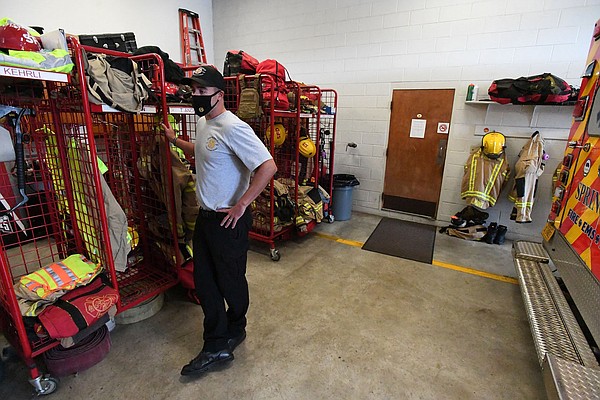 Renovation will help protect Springdale firefighters at Station No. 4

SPRINGDALE — The City Council has answered the call to protect the firefighters in the Fire Department.

The council on Tuesday night unanimously approved a $7,800 contract with Crafton Tull for architectural services to renovate Fire Station No. 4 on Elm Springs Road.

“We’re trying to help with the decontamination of our individuals,” Fire Chief Mike Irwin told the council. “And that’s become very different with our pandemic calls.”

Even without the threat of covid-19, firefighters’ exposure to smoke and burning of hazardous chemicals at fire sites and even the diesel fumes from engines and ambulances has been linked to cancer, according to the National Fire Protection Association.

The renovated space at Station No. 4 will include showers, washing machines and a new weight room to help protect its firefighters and get them ready more quickly for the next call, Irwin said.

“This will help improve response times for our residents, as we get them back in service quicker,” Irwin said.

“We get six med calls a day, and five for the fire engine,” Kehrli said. “We respond to so much more than fires.” He listed wrecks, gas leaks, water problems.

The station covers the area from Wagon Wheel Road to Sunset Avenue and the northwest part of the city near the city’s Shaw Family Park, he said.

Fire Station No. 4 was built in 1982, and has received only a few improvements over the years.

The money for the architect will come from the city’s Capital Improvement Fund, Irwin said.

Colby Fulfer, assistant to the mayor, reported Tuesday night the fund, as of Tuesday, holds about $3 million not dedicated to other projects.

Voters in 2018 approved a $200 million bond program,which included $18 million for Fire Department improvements. The city built Fire Stations No. 7 and No. 8, which are in service, and Fire Station No. 9 will go in service next spring. A classroom building for the department’s training center is under construction.

He hopes the city’s next bond will provide money to replace Station No. 4.

The renovation will not change the footprint or roof line of the building, Irwin said.

“We’re to extend the life of the station as we can for the least amount of cost,” he said.

Irwin said Tuesday, as he looked around the station’s garage area, one of the immediate needs is to move the firefighters’ weight training out of the bay, which it shares with an engine and ambulance.

All firefighters must complete physical training while on their 24-hour shifts.

“And they don’t need to be in here with all this diesel exhaust,” Irwin said.

Although the station has two systems for clearing the air in the bays, the residual smoke from equipment as well as the diesel exhaust from engines and ambulances raise concerns.

“Firefighters have a 9 percent higher risk of being diagnosed with cancer and a 14 percent higher risk of dying from cancer than the general U.S. population,” the National Fire Protection Association shared on its website. The site provided information from research by the Centers for Disease Control and Prevention and the National Institute for Occupational Health and Safety.

The room which formerly held the gym was repurposed as a closet for paramedics’ equipment, Kehrli said.

Irwin expects the covered porch on the west side of the building will be enclosed for the gym.

This also will provide space to expand the firehouse kitchen, providing a refrigerator for each of the three shifts.

“A lot of our life revolves around this kitchen,” Kehrli said. “And we like to eat.”

Kehrli said the city doesn’t provide food for the firefighters. Often, the shift plans, shops, cooks and keeps leftovers for itself.

Irwin said the renovation also will add shower stalls to the bathrooms of Station No. 4. Currently, the station has one shower, which is shared by the five firefighters stationed there during any shift.

They need to wash off the smoke residue as well as other contaminants they don’t want to bring back to their house in Station No. 4 or their families, he said.

The city’s fire crews are not considered “back in service” until all have completed showers, Irwin said.

“These renovations will let more than one shower at a time and help improve response times for our residents,” he said.

The renovation plans also need to find space for special washing equipment for the jackets and pants firefighters wear during calls. The same smoke and material of the fires quickly will deteriorate the protective equipment if not washed after incidents.

Currently, Station No. 4 firefighters must wash their equipment at other stations, leaving them out of their service region when a call might come in, Kehrli said. 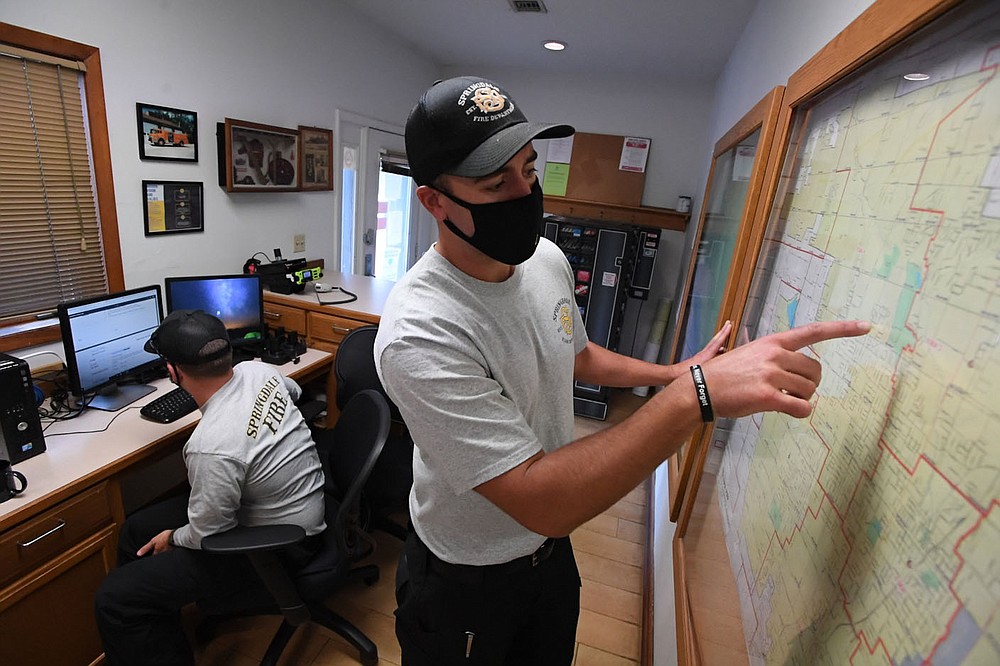 Springdale fire Capt.James Kehrli points out the coverage area Tuesday at Station No. 4. The Fire Department hopes to soon renovate the station. Go to nwaonline.com/200923Daily/ and nwadg.com/photos for a photo gallery. (NWA Democrat-Gazette/J.T. Wampler) 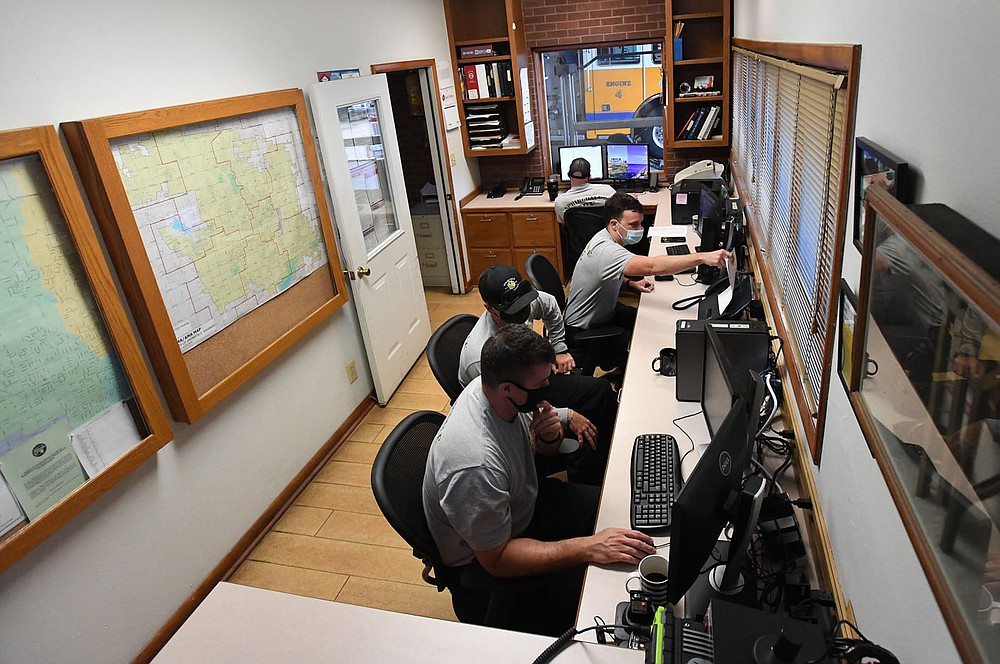 Springdale firefighters use a small room to work on computers for training and ongoing education Tuesday at Station No. 4. The Fire Department hopes to soon renovate the station. Go to nwaonline.com/200922Daily/ and nwadg.com/photos for a photo gallery. (NWA Democrat-Gazette/J.T. Wampler)

Laurinda Joenks can be reached by email at [email protected] or on Twitter @NWALaurinda.