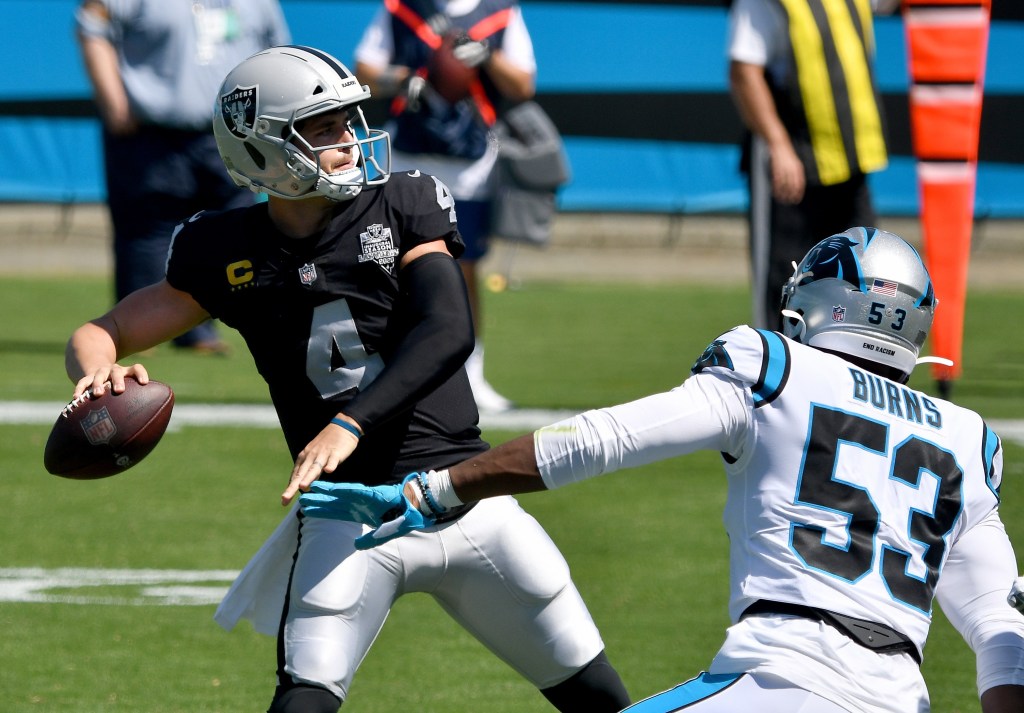 After calling the Coliseum home for the past 25 years, the $1.9 billion facility made possible through a Nevada hotel tax will be on a national stage with the New Orleans Saints 5 1/2-point favorites to hang a loss on the Raiders in an empty stadium.

Raiders coach Jon Gruden, whose team held two practices at the new digs, believes the novelty has worn off.

“We’ve been there twice. It’s not like it’s the first time we have seen it,” Gruden said Saturday in a Zoom teleconference. “We know what a great place it is and understand the responsibility of playing here. I’m not going to be real deep and overly philosophical. We’ve got to play a hell of a football team coming in here and that’s got to be where our focus is — the Saints.”

Five keys for a successful debut in Las Vegas:

The Raiders had 31 rushes and threw 30 passes in their Week 1 win over Carolina, which is pretty much nirvana for Gruden as far as play-calling is concerned.

Duplicating that ratio will be difficult against a New Orleans team that is stingy against the run — so stingy the Saints haven’t allowed a 100-yard rusher since Washington’s Samajae Perine (23 carries, 117 yards) on Nov. 19, 2017. Including five postseason games, that was 44 games ago.

Josh Jacobs doesn’t need to break 100 yards to be effective — he had 93 yards on 25 carries and scored three touchdowns from inside the 10 against Carolina — but in this game the attempts in some cases mean as much as the yards. Defensive coordinator and former Raiders head coach Dennis Allen will run a lot of confusing stunts, and the surest way to avoid sacks and turnovers is to keep the Saints on their heels with the run.

“I don’t look into it too much,” Jacobs said regarding the Saints’ run defense. “I’m just going to stick to the game plan and stick to however we do it. I really don’t care if I get 100 yards or not. Just as long as we win, I’m good.”

The last head coach to have a running back break 100 on the Saints was Jay Gruden, so there’s that.

2. Disrupt the rhythm of Drew Brees

A repeat of the kind of pressure the Raiders put on Carolina’s Teddy Bridgewater in Week 1 would likely seal their doom.

There was just one sack, split between Maurice Hurst and Carl Nassib, and Bridgewater had ample time to survey the field and find secondary options.

“It just wasn’t good enough,” defensive coordinator Paul Guenther said. “Not what I anticipated, not what I saw on the practice field. That’s a big point of emphasis this week to get that back on track.”

Hurst played just 20 snaps in the rotation system and could get more time in Week 2.

“We weren’t good enough, plain and simple,” Hurst said. “We know there’s a lot more work that needs to be done in our room. We’ve got to make an impact. That’s something we feel we didn’t do against the Panthers and something we have to bring to the Saints.”

The Raiders don’t need a bunch of sacks. Brees makes that difficult by betting the ball out quickly. But slowing down his decision-making process and batting down a few balls would make a big difference.

You look at the way the Saints use Taysom Hill and it comes into focus what the Raiders had planned for third-round draft pick Lynn Bowden Jr.

Instead, Bowden didn’t work out and was dealt to Miami. He had one catch for minus-1 yard for the Dolphins Sunday. Hill is liable to lineup as a quarterback who can throw or run the option. He can play tight end. He can line up in the backfield with Brees. Gruden seemed to take joy in describing all the ways Hill can be deployed.

With wide receiver Michael Thomas (ankle) out, Brees is without his top target. So Hill’s use becomes even more crucial for the Saints.

Having an empty stadium isn’t what owner Mark Davis had in mind, but it helps out in one regard. The Raiders can communicate freely, and that should give defenders such as safety Johnathan Abram and linebacker Cory Littleton a better chance to be in position to defend Hill.

Same goes for running back Alvin Kamara, one of the NFL’s top rushing and receiving backs. The Raiders held Christian McCaffrey to three catches and 38 yards. They’d settle for that agains Kamara.

Getting three touchdowns inside the 10-yard line from Jacobs was a good sign for an offense that sputtered much of last season in similar situations.

Throw in a 23-yard touchdown pass to Nelson Agholor on third-and-2 and it was a good day for quarterback Derek Carr. Getting touchdowns instead of field goal attempts, stops or turnovers near the goal line is what separates Carr from the NFL’s elite.

With the ability to run combined with excellent pass blocking and a plethora of receiving targets including tight ends Darren Waller and Jason Witten, there’s no reason Carr shouldn’t succeed in close. Facing a New Orleans team that’s likely to score often, the Raiders can’t waste any opportunities.

It almost goes without saying the Raiders will need to take the ball away a time or three while avoiding the same. But we’ll say it anyway.

When the Raiders beat the Saints to open the 2016 season, Bruce Irvin sacked Brees, recovered the ensuing fumble and the Raiders got a field goal out of it. It was the game’s lone turnover. The Raiders won 35-34.

Brees wasn’t prolific in Week 1 but he did out-duel Tom Brady of Tampa Bay in one regard. Brees was 18 of 30 for 160 yards and wasn’t intercepted. Brady was intercepted twice, including a pick six.

If Carr is intercepted and Brees isn’t, the likelihood of the Raiders winning is slim.