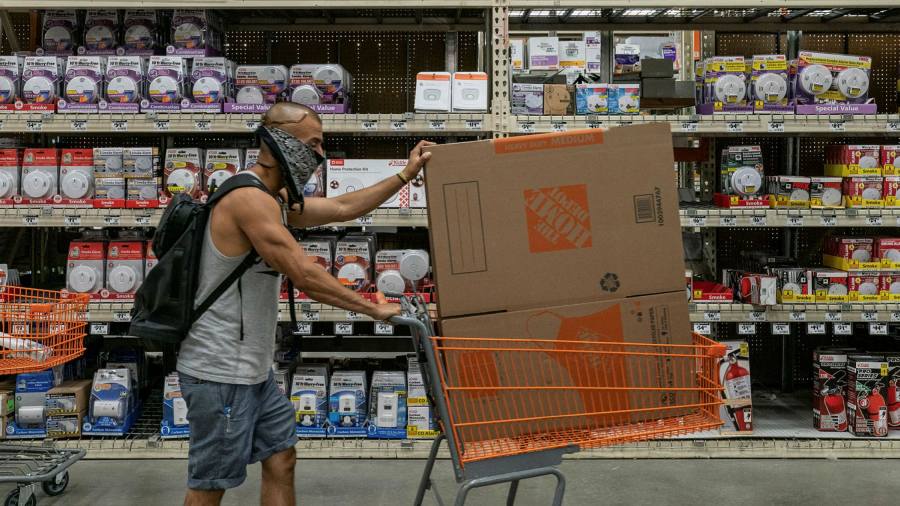 Lawnmowers priced at $3,000 are atypical best-sellers in recessions. But sales of the Ariens Ikon XD, featuring 20-inch tyres, a V-twin Kawasaki engine and ergonomic plush seat, have surged in the US during the pandemic.

While other industries grapple with a shaky economy, the home improvement business is booming. Home Depot and Lowe’s this week reported historically large rises in quarterly revenues as housebound Americans spend billions of dollars more than usual at the two go-to chains for DIY.

“Most of us are forced to spend more time at home than we ever have in our lifetimes,” said Marvin Ellison, Lowe’s chief executive, presenting a 34 per cent jump in like-for-like sales. Customers had been “finding projects around the house” that they either “hadn’t had a chance to get to” or “just didn’t notice” before lockdown.

Craig Menear, chairman and chief executive of Home Depot, said the pandemic had meant “the home has never been more important to the customer”. Extra time inside also caused more wear and tear, he noted, increasing the need for repair and maintenance.

Together, the two companies, which between them operate almost 4,300 stores, produced $65.4bn in net sales in the three months to the end of July, $13.5bn more than the same period a year ago.

As well as undertaking upgrades, consumers were also repurposing parts of their homes for work and study, said Robert Dietz, chief economist at the National Association of Home Builders. “There’s been under-investment” in houses for years, he said. “We’re playing catch-up.”

Shoppers are splashing out on their homes in part because they are spending less elsewhere. The public health crisis has made more Americans unwilling or unable to eat out or go on holiday, while demand for clothing has dropped.

“If you work in industries like discretionary retail, leisure and hospitality, it’s cataclysmic. But if you’re in other parts of the economy, you’ve still got a job and been saving cash. You’re also probably a little nervous about the equity market, so housing feels like a pretty good place to put your money.”

The median US existing-home price breached $300,000 in July, according to data published on Friday by the National Association of Realtors, up 8.5 per cent year on year.

All generations are engaging. We like the longer-term implications of this

Americans were keen to increase the “kerb appeal” of their property especially if they planned to put it on the market, said Craig Johnson, president of the Customer Growth Partners consultancy.

At Home Depot, not only did transaction volumes increase 12 per cent in the second quarter, but average spending per customer also rose 10 per cent. Consumers were “trading up” to more expensive supplies, the Atlanta-based company said, including stain-resistant carpets and pressure-treated wood.

Patio furniture and riding lawnmowers were among the “big-ticket”
items that were selling particularly well, according to Home Depot.

Yet the renewed popularity of home improvement is not confined to the suburbs. Lowe’s said demand was robust across the country, and sales in urban areas were stronger than in rural markets.

Competitors’ difficulties have also helped. Whereas other retailers were forced to close during lockdown, Lowe’s and Home Depot were allowed to stay open because some of their merchandise, such as electrical gear and water heaters, make them lifelines in emergencies.

“It’s difficult for a company our size to grow comparable sales by 35 per cent without having some significant market share gain,” Mr Ellison said. Shoppers were consolidating the number of retailers they visit, added Mr Menear, picking up more items on a single trip.

While DIY was booming, executives said consumers were more reluctant to undertake bigger projects that required professional installation. “In some cases, they’re still a little apprehensive to allow contractors in their home,” said Mr Ellison. Lowe’s sales rose even more in the quarter than Home Depot, which is more reliant on tradesmen.

With the stocks at or near record highs, Wall Street is trying to gauge how long both companies can sustain the momentum, especially as a boost from Washington’s financial relief to households begins to fade. The US government sent stimulus cheques of up to $1,200 to Americans this year, yet Congress is deadlocked over a new round of support.

Both Lowe’s and Home Depot said the environment remained highly uncertain and declined to provide financial guidance for the full year.

For now, there is little sign that demand is falling back to more normal levels. Home Depot said comparable sales in the first two weeks of August had risen year on year at a similar rate to the second quarter.

Mr Johnson argued that the home improvement trend had room to run. Residential fixed investment was less than 4 per cent of gross domestic product in the second quarter, compared with 6 per cent in the boom of 2005, according to data from the Bureau of Economic Analysis.

Executives are hopeful that habits formed during lockdown will last.

Ted Decker, executive vice-president of merchandising at Home Depot, said there had been “questions for years” about whether DIY would ever be as popular among millennials and Generation Xers as it was among baby boomers. “All generations are engaging,” he said. “We like the longer-term implications of this.

“When you start with that first DIY project . . . you gain confidence and you take on the next one.”