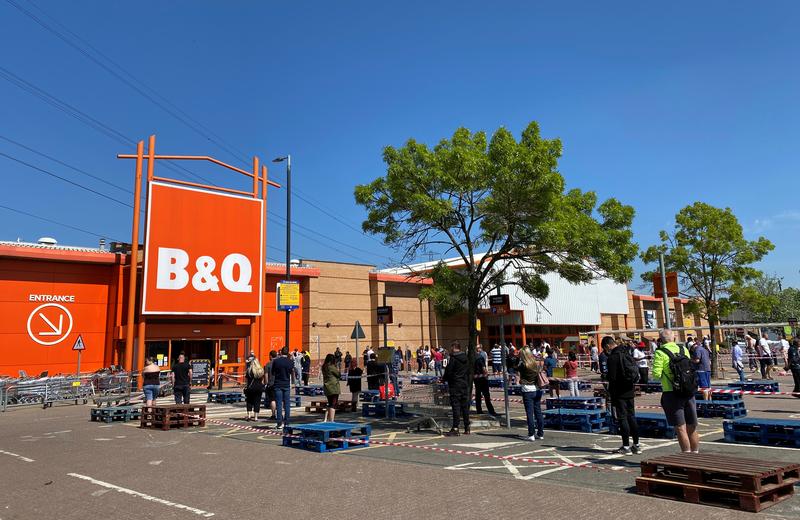 LONDON (Reuters) – The COVID-19 crisis has prompted consumers to rediscover the joy of home improvement, do-it-yourself (DIY) retailer Kingfisher KGF.L said, as it reported a 23% jump in first half profit.

Shares in the group, which owns B&Q and Screwfix in Britain and Castorama and Brico Depot in France and other markets, were up 7% at 0905 GMT on Tuesday, extending 2020 gains to over 30%, after it also said strong second quarter sales had continued.

The pandemic has meant people are spending more time at home, they have fewer leisure options and are traveling less.

“The crisis has prompted more people to rediscover their homes and find pleasure in making them better. It is creating new home improvement needs, as people seek new ways to use space or adjust to working from home,” said Chief Executive Thierry Garnier.

The crisis has also boosted shopping online. Kingfisher’s e-commerce sales soared 164% in the first half and now represent 19% of total sales versus 7% in the same period last year.

The group made a first-half adjusted pretax profit of 415 million pounds ($531 million), beating analysts’ expectations and up from 337 million a year earlier.

Total sales fell 1.3% to 5.92 billion pounds, reflecting the impact of the virus in the first quarter when stores were closed.

Given its financial position the group intends to pay back to the government its UK job retention furlough claim of 23 million pounds in the second half.

It is not, however, paying an interim dividend and Garnier said it was too early to say if there would be a full year payout.

“Looking forward, while the near term outlook is uncertain, the longer term opportunity for Kingfisher is significant,” he said.

Garnier said the focus would be on smaller format stores.

He said he was encouraged by the trial of three B&Q ‘Express’ stores in Britain and wants to trial other smaller formats in other countries.

He added that forming “shop in shop” partnerships with other retailers, along the lines of a recent deal with supermarket Asda WMT.N, and further developing click and collect and home delivery services from stores were also key focuses.