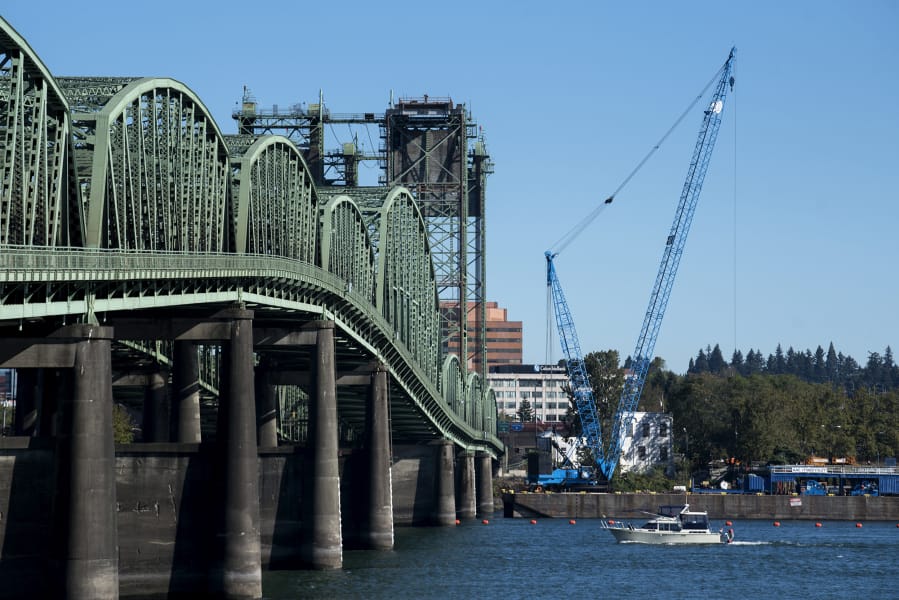 The Interstate 5 Bridge trunnion replacement project wrapped up ahead of schedule last week — or at least the part of the project that required the closure of the northbound span of the bridge. Crews reopened the span late Friday night, two days sooner than planned.

The northbound span closed to all traffic starting Sept. 19 so crews could replace a cracked trunnion and other components of the lift system at the top of the span’s south tower. Both freeway directions shared the southbound span last week, with the middle lane functioning as a reversible rush-hour lane.

The bridge isn’t quite back to full capacity yet. The reopening of the northbound span coincided with the start of a planned weeklong closure of the left lane of the southbound span to give crews room to reconnect the freeway median barrier and perform other wrap-up work from the trunnion project.

The closed lane meant that the bridge’s reopening didn’t bring the traffic relief that Vancouver commuters were probably hoping for. Traffic on I-5 southbound slowed to a near-standstill at the start of the Monday morning rush hour, backing up north of 39th Street and onto Highway 500.

Last week’s traffic certainly wasn’t painless, but it seemed to mostly be a success story. The Oregon and Washington departments of transportation each spent months leading up to the project warning drivers to plan ahead and work from home or alter their schedules to avoid massive gridlock.

Commuters appeared to take the advice to heart. There were some daily backups at each end of the bridge — typically worse for whichever side of the freeway had to compress down to just one lane for the crossing — but they never reached WSDOT and ODOT’s worst-case-scenario length of four miles.

WSDOT is still reviewing its traffic data, spokeswoman Tamara Greenwell said Friday, but a preliminary look showed that southbound daily bridge crossings fell to about half their usual pre-pandemic levels during the closure. (Daily crossings dropped dramatically at the start of the COVID-19 pandemic and were still down about 8 to 17 percent in the weeks leading up to the start of the trunnion project).

Oregon Department of Transportation spokesman Don Hamilton said the early finish wasn’t the result of any particular breakthrough — it was just that the project timeline was calculated to account for delays caused by unexpected problems during construction.

“This turned out to be a fairly problem-free event,” he said.

Press releases from ODOT over the weekend describe a race to the finish, with round-the-clock 12-hour shifts as crews worked to get the bridge open again. The releases do describe some challenges, including the task of removing 60 old pins from the fasteners that connect the lift span cables to the counterweights.

The 11-inch-tall, 30-pound pins had been in place for the entire 103-year lifespan of the bridge, and some of them had to be removed using cutting torches. It wasn’t an unexpected problem, though — work crews ran into the same stubborn pins during the previous trunnion replacement project in 1997.

The spans are expected to return to normal lifting operations for river traffic on Wednesday, Hamilton said, once crews finish removing falsework from the project and other wrap-up tasks.

In addition to the weeklong southbound lane closure, drivers may also encounter nighttime line closures and lifts of the northbound span for up to 30 minutes at a time, as well as nighttime ramp closures between Victory Boulevard in Portland and state Highway 14 in Vancouver.

The northbound bridge sidewalk is still closed until Oct. 4. Pedestrians and cyclists should continue to share the southbound span’s sidewalk.

“People should continue to expect some delays, mostly on the southbound side, as we finish up,” Hamilton said.

There aren’t any other major bridge disruptions on the horizon in the immediate future, Hamilton said, although there are some big maintenance projects on the docket for the next decade and ODOT doesn’t yet know exactly how much of an impact those projects will have on traffic.

The southbound span still has its original coat of paint from 1958, and it’s going to need to be repainted relatively soon to prevent deterioration of the underlying steel. The northbound span was repainted in 2000 and is estimated to still have decades of life in its current coat, he said.

The painting project doesn’t have a schedule or a detailed cost estimate, but ODOT expects it to be somewhere in the ballpark of $75 million, Hamilton said. The process may end up being fairly complex due to environmental concerns about lead in the older paint, he said.

The other big project is a resurfacing of the northbound span deck, which will likely take place between 2024 and 2027 at a cost of about $33 million, Hamilton said.

Then there’s the routine maintenance projects — the lift span cables have to be re-greased every year, the electrical systems and computers need regular work and the bridge needs a structural inspection every two years.

All told, ODOT is expecting the bridge to cost about $282 million for maintenance over the next 20 years — if it sticks around that long. A previous replacement plan, the Columbia River Crossing, fell apart in 2013, but Washington and Oregon lawmakers embarked on a new replacement effort last year.

The project is still in the very early stages, so construction of the new bridge — if it happens at all — wouldn’t begin for several years. Still, Hamilton said, ODOT will be keeping an eye on how the effort is progressing and adjust its plans accordingly.

“These (maintenance) projects going forward, a lot of it will depend on what the new bridge project schedule looks like,” Hamilton said.