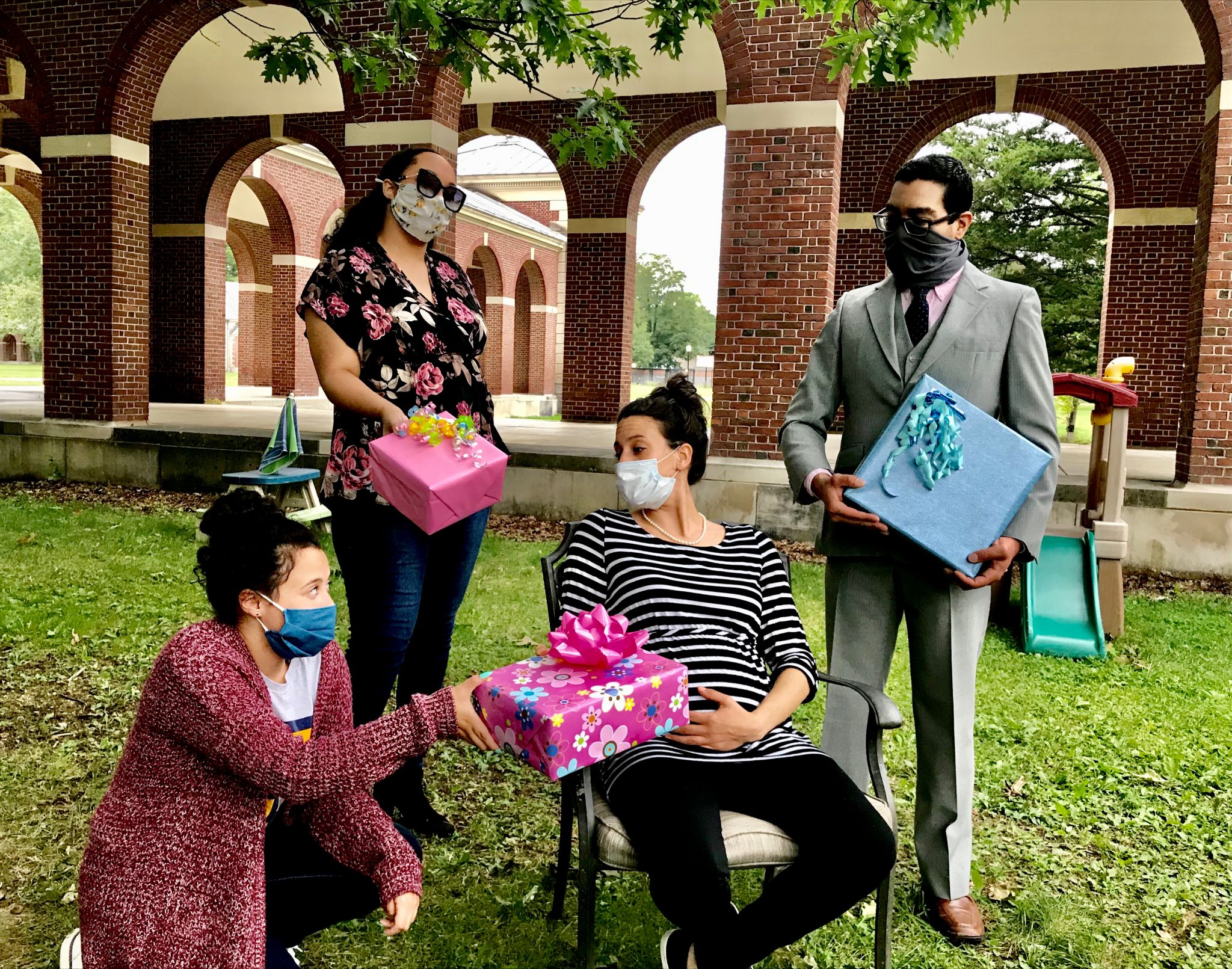 Elizabeth Pietrangelo lives for theater. She majored in it in college, graduating nine years ago, and moved to New York City to pursue the craft. She has not traded lines in person with other actors, in front of an audience, since January.

“It’s the longest I’ve ever gone without doing a show,” says Pietrangelo, who retreated upstate, to her parents’ home in Queensbury, at the beginning of the pandemic shutdown in March. By this point, she says, with almost no live theater available, for actors to perform or audiences to watch, she would have been grateful for almost any opportunity.

Happily, something excellent came along: “Cry It Out,” a dark comedy by Kingston native Molly Smith Metzler that is being staged outdoors this week and next by Home Made Theater on the grounds of the Spa Little Theatre in Saratoga Spa State Park.

“This is one of the best-written plays I’ve ever read and ever been in,” says Pietrangelo. “It’s so smart and … hilarious.”

“Cry It Out” will be performed at 3 p.m. Saturday, Sunday and Oct. 3 and 4. As a fundraiser for HMT, which normally derives half of its $350,000 annual budget from ticket sales and sponsorships related to live productions, tickets will be $75 per person, with audiences limited to 40 people per performance. A ticket to view a three-camera live stream of the Oct. 4 performance costs $20.

The 3-year-old play, which quickly gained popularity around the country, originally was to have been produced in the February slot of HMT’s 2020-21 season. After the company canceled the final production of this past season and called off plans for what had been announced for this fall because of coronavirus-related restrictions, Homemade management took another look at what might be possible for “Cry It Out,” which is set in a suburban backyard.

“The board and I were committed to finding a way to do live entertainment that was still safe for everyone involved — audience, cast, crew and staff,” says Eric Rudy, general manager of Home Made Theater. Founded in 1986 at Caffe Lena in Saratoga Springs, the company has called the Spa Little Theatre home since the 1986-87 season.

Long known for community-theater staples including Agatha Christie mysteries, HMT has worked to offer more contemporary and socially aware plays in recent seasons, Rudy says, with “Cry It Out” being a prime example. It was submitted by veteran area actor and director Patrick White, who had planned to present it next winter, under HMT auspices, in an alternative space, perhaps a farm greenhouse. When the company asked over the summer if White could stage it outdoors at the Little Theatre, and put it together quickly, he leapt at the opportunity.

“We were really racing the clock in terms of auditions and rehearsals,” says White, who has acted at local community theaters since the mid-1990s and directed productions around the area for the past five or so years. He spread the word among his contacts, including Pietrangelo, whose shows he has regularly attended since working with her on a production at Albany Civic Theater. Rehearsals with the four-member cast started online in early August and have been running in person five evenings a week for a month; the cast works outdoors for about the first 90 minutes, until dwindling light sends them inside.

Though the script makes no reference to the pandemic or COVID-19, incorporating masks and physical distancing into the production never felt forced or awkward, according to White and Pietrangelo. All of the scenes involve two or three characters; three are recent or new mothers, and the fourth, the husband of one of the women, is never on stage with all of the women at once.

As they would today in real life, the characters do not wear masks when distant from one another on the 36-by-18-foot playing space on the Little Theatre lawn, though they pull up their face coverings when within 6 feet of each other. Audiences, who are requested to bring lawn chairs or blankets, will be separated into 10-foot squares per party, with the nearest at least 12 feet from the actors, the farthest up to 70 feet, according to Rudy, HMT’s general manager. The actors will be amplified.

“The masks have almost been helpful in some regards,” says White. When directing a play, he adds, “You’re always looking … to physicalize the psychology” behind a scene. Says White, “There’s a whole vocabulary of actions” made possible by having masks, hand sanitizer and cleaning wipes to provide additional illuminating behaviors for the characters to engage in.

Though the three female characters have new motherhood in common, they differ in background and social strata.

“The play is very timely in that it deals with the disparity between classes and gender roles,” says Rudy.

Adds White, “It’s funny, it’s socially relevant, it’s got great roles for women — it’s got everything.” During a phone interview, White said the play doesn’t mention its characters’ races, which offered him the opportunity to add that as an unspoken dimension with his casting choices. He said in a follow-up email about racial diversity, “I really can’t answer the question specifically because I don’t know how they identify themselves, but I think I have a diverse cast, and I know they’re all brand new to HMT.”

For Pietrangelo, being in a play again has buoyed her mood in welcome ways. “I wasn’t planning on doing any theater, because nothing was really happening anywhere, but when this came along, … I almost did it on a whim,” she says.

She hadn’t realized how much she missed live theater until walking into the first rehearsal for “Cry It Out” and spontaneously acting out the title.

Pietrangelo says, “To be in that whole creative theatrical space with people who love it as much as I do? It was so overwhelming, I started crying.”

“Cry It Out”
By Home Made Theater

When: 3 p.m. Saturday, Sunday and Oct. 3 and 4
Where: Outside at the Spa Little Theatre, Saratoga Spa State Park, Saratoga Springs
Tickets: $75 for in-person performances, $20 to view a live-of stream the Oct. 4 performance only.
Info: 518-587-4427 or homemadetheater.org/box-office
Note: No seating will be provided; audiences may bring lawn chairs or blankets. Parties will be placed together in 10-by-10-foot squares of lawn.