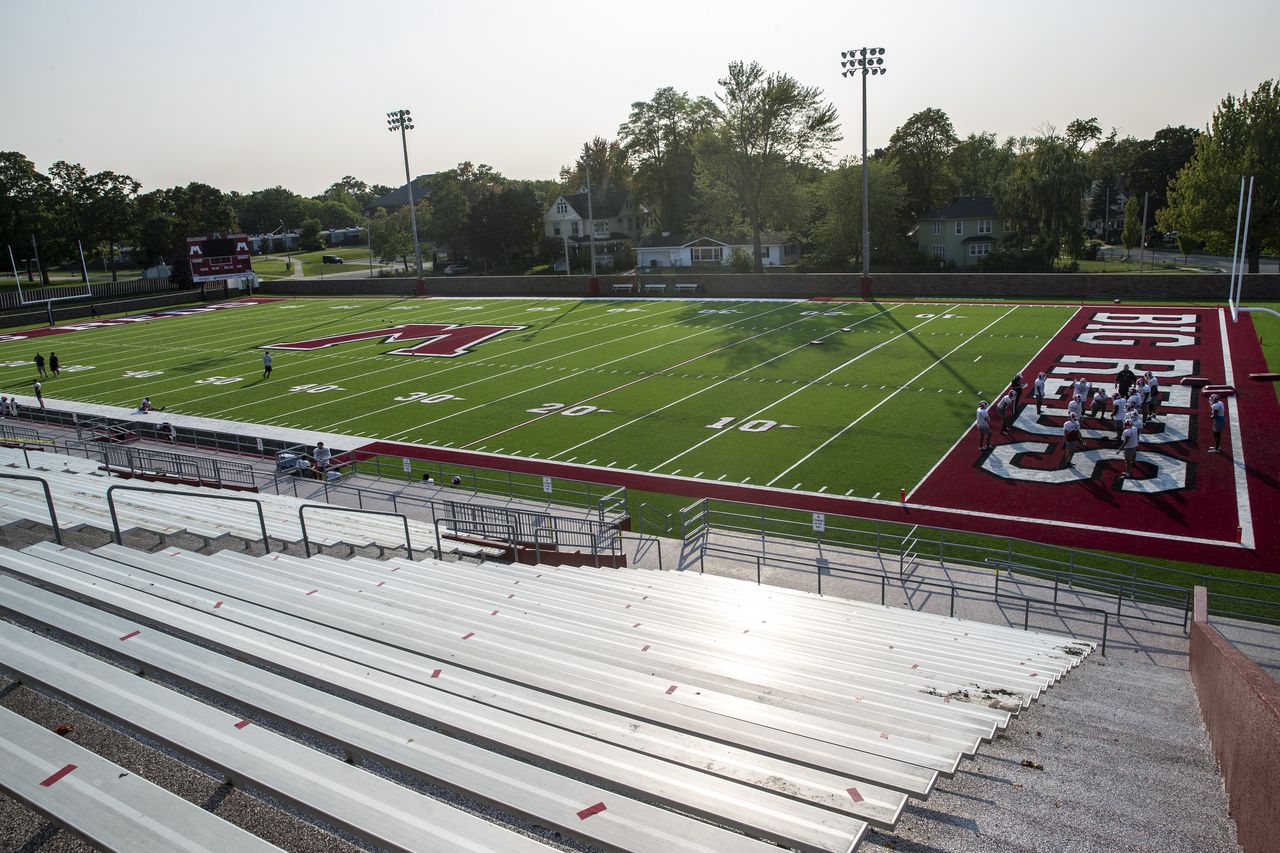 MUSKEGON – Shane Fairfield was 9 years old when he played his first football game at Hackley Stadium.

“That was exciting because I felt like I was in the Big House (at University of Michigan). I mean, being a 9-year-old kid going through that tunnel and seeing the field and there’s no track around it and that kind of stuff, I was blown away then,” Fairfield recalled earlier this week, as he prepared his Big Reds (1-0, 1-0 OK Green Conference) for their big crosstown matchup against Mona Shores (1-0, 1-0).

At 7 tonight, the Big Reds will finally get the opportunity to play in their upgraded, century-old stadium. As fate would have it, the rival Sailors will be on the opposing sideline.

Muskegon High School has been playing football at the Hackley Stadium site since 1907. The home of Michigan’s all-time winningest program has stood the test of time, but this summer the classic venue received a facelift in the form of an approximate $1 million renovation, including a new AstroTurf playing surface.

Watch MLive’s time-lapse video above — footage courtesy of The Christman Company, general contractor for the renovation project – to see the transformation of the iconic stadium.

“It turned out nice,” Muskegon senior Tyreese Oakes said. “This ain’t what I pictured because you can’t really see from a picture. And then they got done … from the sand, I’m like, ‘It’s just a normal field,’ but when they took a little bit by a little bit, it was awesome.”

Added Big Reds senior Amari Crowley: “I didn’t believe it at first, then I saw them breaking ground – I got real excited. I saw it start to get finished and I was, ‘Oh, yeah, it’s game time.’”

Indeed, it is game time, and it’s a big one.

Muskegon and Mona Shores have squared off as chief contenders for their conference’s championship in recent seasons. Both have made numerous state finals trips to Ford Field during that time, too.

The Big Reds have dominated the all-time series against the Sailors, 32-7. Mona Shores’ last win over Muskegon came in 2015. The Sailors’ last win at Hackley Stadium was in 2014.

Tonight, the focus for both teams will be winning the game, although there is some pomp and circumstance surrounding it with the facility upgrades.

“I always say, besides here (at Mona Shores’ Sailor Stadium), there’s no place I’d rather play a football game and no place I’d rather have our kids be able to play, there at Hackley Stadium, because it is a unique experience,” said Mona Shores coach Matt Koziak, who served as a Big Reds assistant (2004, 2006-08) before he coached them for one season in 2009.

“It’ll be a little bit different because I don’t think I’ve ever been on the visitors’ side and not seen it packed from goal line to goal, you know what I mean, so that’s going to be a little bit different scenario. Both sides have to play the game regardless of who’s there to watch ’em, but it’s definitely going to be a unique situation unlike I’ve ever been a part of.”

Big Reds supporters and casual fans alike have been eager to see the new-look stadium, but in a cruel twist of irony, few will be able to get an in-person glimpse tonight because crowd sizes have been restricted per Executive Order and Michigan High School Athletic Association guidelines. Only two spectators per player are being allowed in stadiums throughout most of the state.

“I mean, it could be better (with fans), but at the same time I’m grateful,” said Oakes, whose favorite part of the renovation is the new brick wall around the perimeter of the field, which many agree takes the look of the stadium to the next level.

Muskegon senior Julius Sims Jr. could not believe his eyes when he got his first look at the completed renovation.

“I was excited. Actually, the day that it was done, I came and worked out here on the ladders and stuff. … And then once the bleachers and stuff got finished, that was the icing on the cake. This place is, I don’t know …,” Sims said, trying to find the right words.

Mona Shores players are excited for tonight’s opportunity. Sailors senior Keondre Pierce said he would like to be part of the team that’s the first to beat Big Reds on their new synthetic turf.

Even with a light crowd, Mona Shores senior Gary Humphrey is excited to play at Hackley one final time.

“It’s still at Hackley Stadium. I think it’s still going to have the same (environment) about it. It’s something different about there,” he said.

Fairfield agrees about the aura of the stadium. He played for Muskegon Catholic Central, whose championship history and mystique speaks for itself, but he said there’s just something special about Hackley Stadium. He always looked forward to playing there and most of his memories are fond – even the time he was run over by Andre Burks on the old cinder track.

“We were pretty good. We won the state title and won several state championships, but there was still something about Muskegon football and seeing the red helmet with the two stripes,” Fairfield said. “And then, of course, being over at Catholic you’d always hear the roar from over here. No matter how much we played or how much we won by, it always seemed to be, Muskegon was the team.

“We’ve been at Eastern, we’ve been at Ford Field, we’ve been at Michigan, we’ve been at Michigan State, we’ve played at all the other high schools around the state,” Fairfield said about his days with the Big Reds coaching staff. “EGR is a beautiful facility, you know, and some on the east side have some really nice places, but man, I’ll tell you what, when you’re seven yards away from the fans, goal line to goal line – I mean, (the grandstands) goes back of the end zone to back of the end zone. And it’s loud, the tunnel, the atmosphere, the love and the passion for Muskegon football and this stadium and the tradition, there’s nothing like it.”

More bells and whistles are coming to Hackley Stadium, including iron gates for the entrance points. Muskegon superintendent Matthew Cortez said that those are expected to arrive later this season. Also, decorative railing atop the 6-foot-tall brick wall on the visitors’ sideline is in the plans, a detail included in the district’s second bond proposal. Cortez said that part is probably a year or two down the road.

When Hackley Stadium was renovated, much foresight was involved. Cortez could not be more proud of the way it turned out and how the community has backed the district with the passing of the bond proposals.

“We’re ready for the next 150 years … because we’re almost 150 years old,” he said. “When you look at where we took that stadium, we’re building it not just for now, but we’re building for the future and it is a tremendous reflection of how important our community is to our district.”