Millions must choose between working at home while watching the kids and helping them with school, or giving up the job, the paycheck and the career.

We’ve reached 200,000 Americans dead of COVID-19 in eight months — nearly half the U.S. death toll in World War II, which lasted over 45 months for America. As if that isn’t awful enough, damage from the pandemic keeps piling up in other ruinous ways. It’s all connected, meaning that one bad thing can make something else worse.

Case in point: With schools now underway, 4.3 million workers might have to quit their jobs to take care of children learning from home. That’s according to research by Brevan Howard, an asset management firm, which says if these workers were counted as unemployed, they’d add 2.6 percentage points to the unemployment rate, standing at 8.4%.

Some perspective: President Donald Trump inherited a jobless rate of 4.7%.

Like a stone thrown into a pond, when you take 4.3 million workers out of the labor force, the ripples spread far and wide. Even if partially cushioned by jobless benefits, it’s 4.3 million fewer paychecks, 4.3 million fewer people spreading those dollars around in an economy that is about 70% dependent on consumer spending. This, in turn, puts economic pressure on businesses. Some might be forced to cut back, and the ripples keep spreading.

Then there is this: Millions of idled workers means payroll taxes aren’t being collected — which is how Social Security and Medicare are financed. The nonpartisan Congressional Budget office said recently that so much damage has been done already this year, the Social Security Trust Fund is projected to run out by 2031. That’s several years earlier than forecast just months ago.

Inexplicably, Trump said on Aug. 8 that he wants to kill the payroll tax financing for these critical social safety net programs altogether. 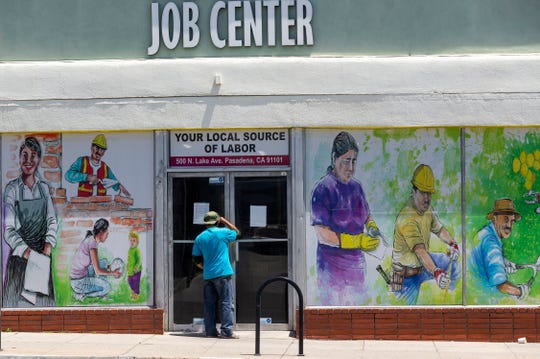 Trump says schools should be open so many parents can go back to work. I empathize with this sentiment. Even so, a joint study by the American Academy of Pediatrics and the Children’s Hospital Association reported this month that more than half a million children across the United States have been diagnosed with COVID-19. Half a million. Over the summer. While most were staying home.

What happens if those more than half a million children go back to classrooms that may be overcrowded? And spend all day in a school that might not, because of budget problems, have the necessary safeguards in place? Trump’s point on this is worthy — I don’t say that too often — but the health concerns are as well. And not just for the students, of course, but also teachers and other school employees.

Coronavirus: Some school districts are willing to open upls — for a price

This dilemma has resulted in a mess. Some schools opened to immediate, disastrous effects. Others have stayed closed. Still others are experimenting, splitting kids’ time between school and home.

Parents are caught in a gray zone here. As recently as February 2020 B.C. (before coronavirus), they could head off to jobs in the morning, knowing that their children would be either in school or day care. Many also knew that other family members — grandparents perhaps — would be available to help out. All of this has been disrupted by the pandemic, and for millions of parents the choice has boiled down to this: Work from home while watching the kiddos and helping them with school, or give up the job, the paycheck and the career.

A workforce in decline

Betsey Stevenson, an economist at the University of Michigan, writes that many workers could wind up dropping out of the labor force permanently, inflicting economic damage that might endure for years: As a result, “long-term unemployment grows over time, and labor force participation falls slowly as unemployed workers give up and leave the labor force and those considering whether to enter or reenter the labor market become discouraged about the prospect of finding work.”

Meanwhile, other long-term economic damage is harder to quantify, such as an alarming report from the Centers for Disease Control and Prevention saying that as many as 1 in 4 people ages 18-24 have seriously considered suicide as the pandemic grinds on. Mental health effects like this will be felt years into the future.

Eventually, there will be a vaccine. But certainly not by Election Day, as the president keeps hinting. He hasn’t a clue. This is the same guy who thought it was OK to inject people with bleach or household disinfectants. Who turned to a kooky pillow manufacturer for science advice. Who thought we could stop a hurricane by dropping a nuclear weapon on it, according to Axios. Who called the CDC director “confused” for saying that masks were a powerful tool against COVID-19 and that a vaccine would not be widely available for another year.

Even when that vaccine arrives — and what a joyous day that should be — the scars will not heal instantly. It will take years for the effects of this virus, intertwined and destructive, to go away.

Paul Brandus is the founder and White House bureau chief of West Wing Reports. His latest book, published last month, is “Jackie: Her Transformation from First Lady to Jackie O.” Follow him on Twitter: @WestWingReport