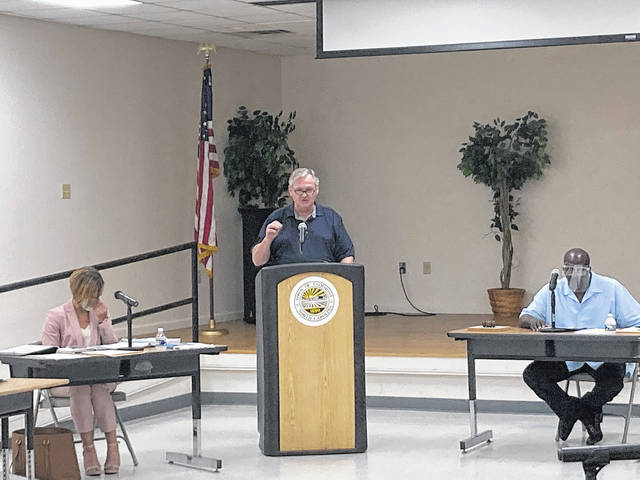 FAIRMONT — Commissioners here were told Tuesday that a new health-care facility is on its way to town.

Robeson Health Care Corporation CEO Tim Smith said a new medical center, which will be about 14,000 square feet in size, will be built at the site of the South Robeson Medical Center on South Walnut Street. The medical center and property are owned by the corporation.

Construction of the new facility will begin in the next 60 days, he said. The project will cost about $3.5 million.

“This is one that we’re very very proud of,” Smith said of the project.

The facility will offer primary health-care services and have a behavioral health specialist, addiction specialist, mental health worker and dentist on site, he said. The center also will contain a pharmacy.

“I think it’s going to be a good asset to the citizens,” Mayor Charles Townsend said.

He believes the corporation will do its best to provide town residents with the health care they need, the mayor said.

In other matters, commissioners approved the Capital Improvement Plan and Asset Management Plan prepared by LKC Engineering to help improve water and sewer systems in the town. The 10-year improvement plan carries a price tag of $12.8 million and calls for improvements to pump stations, aeration system, the town’s Waste Water Treatment Plant access road and more.

Bill Lester, LKC Engineering’s principal engineer, said the town should make small improvements where it can to save money and continue to improve its systems.

“The idea is to target and keep chipping, and making sure we do the right things first,” Lester said.

The company is helping the town apply for grants to cover some expenses.

Also approved in a 4-1 vote was a request by John Baker for a conditional use permit to place a mobile home at 110 Pine St. in an R-8 zoning district. He was given permission by the town in May 2019 to have a mobile home placed on the property, but did not get it placed within the allotted time.

The town’s planning board denied the request because of complaints from neighbors who were concerned the mobile home would decrease their property values.

McCallum said a mobile home was about 500 feet from where he placed his, believing it was in the correct zone. But where the home was placed was not in the R-5 zone.

“It actually behooves me that I can stay on a board that is so [expletive] bias,” Evans said.

The vote will allow more people to ask for zoning exceptions, he said.

“Once you let that genie out of the bottle, it’s too late,” Evans said.

After the meeting, McCallum said he thinks the town should update its zoning to make the town an R-5 district and give residents a more affordable housing option.

The town is working with LKC Engineering to update the zoning map, which should be available for use by the end of the year, Interim Town Manager Ricky Harris said.

Also on Tuesday, the commissioners heard from Tony Mackey, a managing partner of Fairmont Golf Club, who said water often drains from canals and other areas in the town to the golf course. There are days when minor rainfall can force the course to close its doors.

“What I’m asking for is fair and equal treatment as far as drainage work being done,” Mackey said.

The U.S. Army Corps of Engineers once was involved in helping clean out canals in town, but has since stopped. Evans asked Townsend to took into why the Corps stopped.

Townsend asked Harris to partner with the Public Works Department to look into the drainage matter and bring results of that investigation to the Board of Commissioners for consideration.

“That well is back online now, so all our wells are back working,” Seals said.

Harris said a property at 720 Mckoy Street is in the process of being torn down and should be cleared away in the coming weeks.

Attorney Jessica Scott said she is working with the state to find options regarding a home off Mckoy Street that has $190,000 in Medicare liens on it. It is owned by heirs of a deceased person and is worth only $25,000.

Town resident Nate Thompson asked the commissioners to continue cleaning up the town. He has been working in the Old Field area to improve the look of the town.

“My concern is for what the environment looks like,” Thompson said.

“I hope that we can continue and pick up that ball that seems to have been dropped,” he said of demolition projects.

In other business, the commissioners approved reappointing Cynthia Dudley for another three-year term on the ABC Board and allowing the NCWorks Career Center to use the town’s courtroom in October as the site of a virtual job fair.