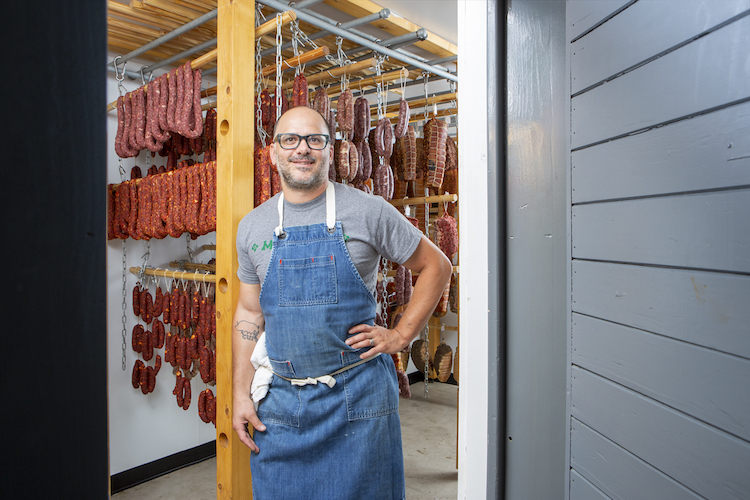 One of Pittsburgh’s best chefs, Justin Severino (of Cure, Morcilla and Salty Pork Bits) wants to teach you how to cook one of his great dishes. At the same time, he wants to raise money for kids who deserve a break.

Severino will supply the food — which you can buy as a meal kit — and then he’ll take you through how to cook and present the meal via video.

The innovative fundraiser will support the foundation’s mission to fulfill wishes for kids with critical illnesses.

“I was really happy they called me,” says Severino, who notes that all involved in his restaurants miss pre-pandemic times. “To not be able to experience the most basic joy that we get to experience in the restaurant — which is feeding people and making them happy — has been really hard.

The dishes are some of Severino’s favorites from his restaurants. That’s including the late, beloved Cure, which set a new standard for charcuterie and Pittsburgh dining in general, when it opened eight years ago.

“Spaghetti Carbonara is maybe one of my favorite things to cook,” says Severino. “It’s seemingly very simple, but there’s a real technique there that I think is super valuable — tempering eggs to thicken the sauce. It was on the menu at Cure for the most part the entire time that we were open. Part of the reason I kept it on the menu was that it really grounded and reminded me and our cooks that the hardest thing to do is simple food.”

“I like sharing that recipe with people. Once someone learns how to make that dish, it’s in their rotation forever.”

“There’s our Morcilla classic, which is Spanish chorizo with dates and cabrales bleu cheese and vanilla oil,” says Severino. “That’s been on our menu here every day we’ve been open.”

The Quarantine Kitchen project came about out of necessity. “We have had to reimagine fundraising in an unprecedented time,” says Dana Antkowiak of Make-A-Wish Greater Pennsylvania and West Virginia.

“Due to the pandemic, our chapter has lost nearly $750,000 in donations. And even though many travel wishes have been postponed, wishes are still happening! Wishes like shopping sprees, puppies, playsets, car restorations and above ground swimming pools, to name a few. In a week or so, we’re putting in a sport court for a local child. And when travel wishes can resume, we will need that funding even more.”

Severino is ready to help and he’s used to being on camera. He was featured on Anthony Bourdain’s show, “Parts Unknown” and Andrew Zimmern’s “Bizarre Foods America.” Making a cooking video for Make-A-Wish was “a no-brainer,” he says.

“I have a two-year-old,” says Severino. “Since becoming a father, your views on everything change. I’ve got a real soft spot in my heart for kids. If there’s anything I can spend my time doing, I’d love to be able to help kids as much as I can.”

Meal kit sales close at 4 p.m. on Thursday, September 24. One kit serves two people and costs $125, with $50 going to Make-A-Wish. To buy one, click here. There’s also a Quarantine Kitchen Gin and Tonic kit, and another for Red Sangria.

In related news, Severino says that the goal for Salty Pork Bits’ new Lawrenceville retail location is to be open by Thanksgiving. And when will Morcilla reopen for in-house service?