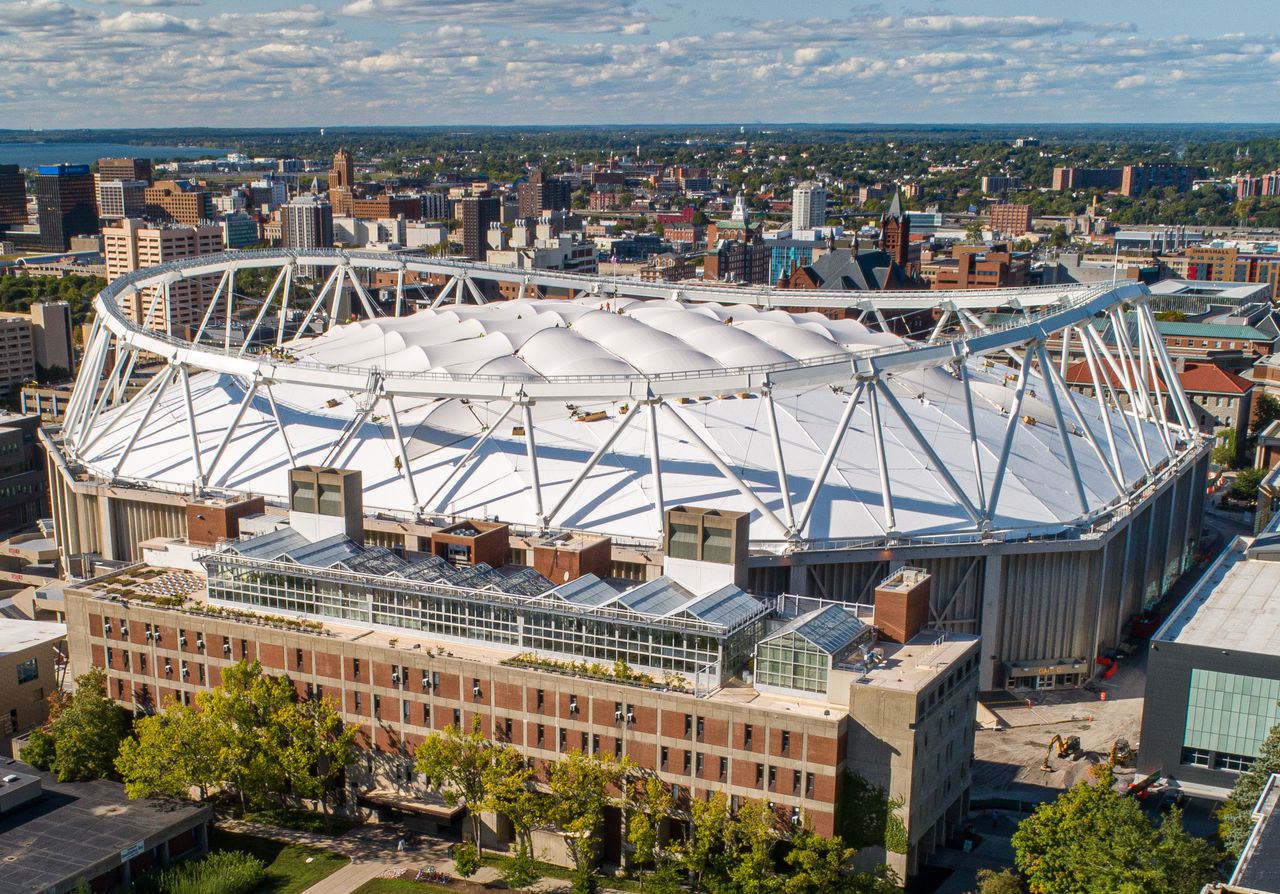 Carrier Dome renovation: What’s left undone? What might come next?

Syracuse, N.Y. — Syracuse is investing $118 million in renovating the Carrier Dome, installing a new roof, improving amenities and providing what the school is touting as a “new stadium experience.”

In previous conversations before the impact of the coronavirus pandemic, Syracuse athletic director John Wildhack had noted there is an appetite to do make more improvements and Syracuse has referenced a future Phase 2 of the renovation, although it hasn’t set a timetable or promised any specific upgrades.

There are certainly additional luxuries that fans would suggest.. Some of these things were initially included in renderings, while others have been discussed as options.

Heading into the weekend that Syracuse celebrates completing some substantial components of the project, here’s a look at what could be next. (Also, a look at a video of the new scoreboard, courtesy of SU).

The most common complaint from Syracuse fans that wasn’t addressed in the renovation was the tightly-packed silver benches that currently serve as seats in the venue.

The hard metal isn’t very comfortable, prompting the university to sell cushions to fans. There is limited space for food or drinks, leaving them in constant danger of being stepped on or kicked over. At this point, many arenas offer individuals seats with cupholders, at least in select areas.

The bleachers are built tightly together, seemingly made the appropriate size for people that lived 40 years ago rather than today. The silver doesn’t look very nice on television broadcasts.

Syracuse has acknowledged this is an improvement they would like to see made, although it hasn’t fit into the project so far.

Syracuse has also sent out fan surveys trying to gauge how popular things like luxury seating would be, and what price fans would be willing to pay for certain experiences.

Given the comfort and ease of watching at home, attendance at most places is dropping. It makes a lot of sense for the future to include a decreased capacity, while focusing on providing the best experience possible.

One of the big subjects that Syracuse talked about early in the project was about increasing the amount of natural light coming into the building and finding ways to make the arena integrate more seamlessly into the campus.

The school talked about the importance of the building from the start of an SU student’s career to the finish, and about how it wanted the building to have a more consistent presence for all students, not just sports fans.

Some of the early renderings of the Carrier Dome renovation included walls with windows that allowed natural light to come into the building and allowed the excitement to be showcased to anyone walking by.

Those visions hasn’t been incorporated into the current project but its safe to say the look was aspirational and the next investment could move toward that goal.

By replacing the roof and eliminating the need to keep it pressurized at all times, this renovation makes any future construction project much more manageable.

One of those other construction projects is likely to be an effort to expand the concourses. The renderings also showed an expanded footprint where walls jutted out closer to the school’s quad, presumably expanding the space for fans as they walk around the building.

Vice President & Chief Facilities Officer Pete Sala has noted that expansion is on his wish list for the facility, and the importance of it was emphasized last year when a sellout crowd resulted in a traffic jam on the walkways during the Clemson game.

It’s unclear when it will be resolved but the naming rights issue continues to hang over the building without any public signs of a solution.

Syracuse has acknowledged that name of the building remains the Carrier Dome, but it has also gone to great lengths to minimize the use of the name Carrier, seemingly to try to create leverage to against a deal that has been reported to be “in perpetuity.”

Last year, those efforts including eliminating all 64 mentions of the company that helped pay for the initial building by contributing $5 million, reportedly in exchange for naming rights “in perpetuity.”

In the most recent story on the Syracuse Athletics website the school discussed the building’s highlights and again omitted the words Carrier. Instead it was called, a structure, an upgraded facility, a venue, the Dome and the building.

The school has also begun describing the arena more frequently as a “Stadium” and describing the improvements as providing a “new-stadium experience.”

The status of the relationship between the two will remain an interesting subject for the foreseeable future.

Would you pay $95,000 for a Carrier Dome suite, and other Syracuse survey highlights

Carrier Dome renovations will be on display for the first time on Saturday. Here’s what will be new

Why is Syracuse avoiding the word Carrier? Experts say there’s a rhyme, reason