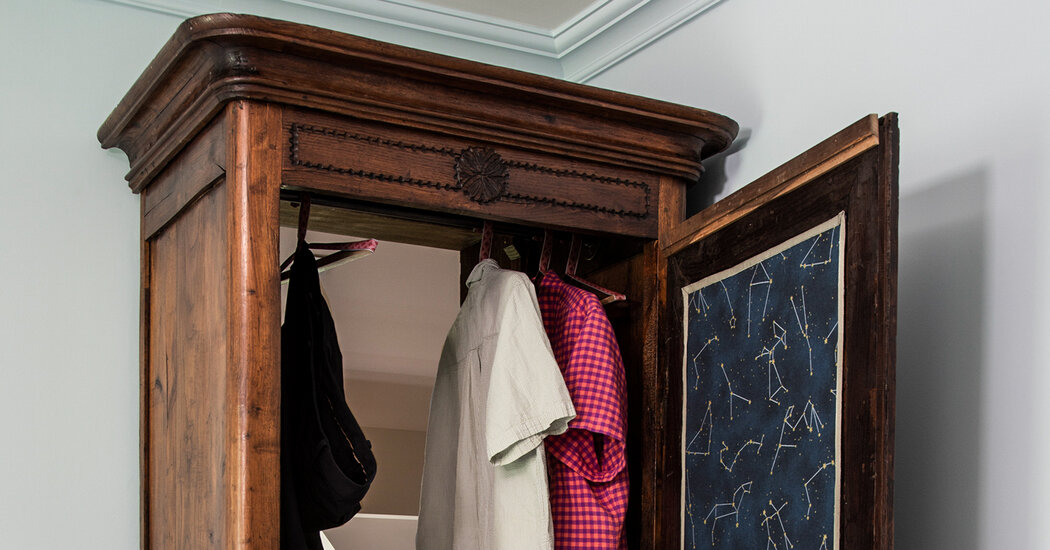 A Narnia-Inspired Design, on Long Island

This article is part of our latest Design special report, which is about taking creative leaps in challenging times.

It is not unheard of for ambitious homeowners to imbue a mere building with narrative dazzle.

But rarely is the mythologizing as specific and literary as it is for the Long Island guesthouse of Betsy and Bryan H. Lawrence: They call it the Narnia House.

Yes, it has a surprising installation, as in the classic C.S. Lewis novel “The Lion, the Witch and the Wardrobe.” Stepping through a French armoire at the top of a back stair leads to a second-floor passage and toward a Narnia-themed bedroom.

That fanciful concept — Ms. Lawrence’s idea, stemming from her love of the children’s book series — is only part of the charm of the red brick, five-bedroom home, originally built in the 1990s and acquired by the couple about three years ago as an addition to their adjacent family compound.

Making the guesthouse exuberant required the practical efforts of Thomas Jayne and William Cullum, of Jayne Design Studio in New York. The firm is known for deftly mixing the classical and the contemporary and for layering custom details — while remaining open to quirk.

“To me, it’s enchanted,” said Ms. Lawrence, a psychologist and artist who serves as president of the New York School of the Arts. Mr. Lawrence is an investor.

“It was an ugly duckling, transformed into a beauty,” she said.

The Lawrences gave the designers room to run. The property was intended as a place for entertaining, for displaying Ms. Lawrence’s own artworks and the rest of her collection and for billeting friends and family. So there was plenty of space for whimsy.

Initially, the house had some less-than-ideal characteristics. But Mr. Jayne does not see problems; he sees, in his words, “opportunities for enrichment.”

Getting rid of the frosted-glass front door was among the first steps. It was replaced with a paneled wood door with expansive sidelights and a pediment with a curved top, meant to mirror the eyebrow window above. Applying dark red- and evergreen-colored trim helped unify the exterior.

Neither the design team nor the Lawrences were afraid of big architectural changes. Mr. Jayne thought the existing staircase was too elaborate and imposing so he had it ripped out and replaced with a pared-down Georgian-style version with delicate balusters.

The other big problem was that an awkwardly placed powder room — facing the front door — thwarted the natural orientation of the house. So he moved it. “We put a back door essentially on an axis with the front door so you can see out to the landscape and the water beyond,” Mr. Jayne said.

The Lawrences enter and leave the house by the back door, passing through a columned porch area, so that space needed a makeover, too.

Mr. Jayne and Mr. Cullum replaced the rotting columns with forms resembling bamboo trunks and hired Chuck Hettinger, a decorative painter, to add coral-colored stripes resembling flames at the bottom. The motif helps connect the porch to the brick exterior, as does a decorative frieze where the columns meet the ceiling, one of the house’s many Arts & Crafts touches.

Existing design oddities were revamped and put to work. The house has two turrets, one on the main floor and the other upstairs. In the upper turret, the designers replaced wooden lateral support rods with metal ones and turned them into part of a new light fixture.

Color is the fuel that supercharges the scheme, making a happy tumult of greens, yellows, purples and blues. “Betsy uses color in her work, and she’s adept at understanding color and its relationship to everything else,” Mr. Jayne said.

He gave the Lawrences a mint green kitchen (Farrow & Ball’s Breakfast Room Green) with custom cabinets inspired by Charles Rennie Mackintosh; the refrigerator’s exterior paneling has a classical column in relief on one side. One of the two gallery rooms includes a large section of bright blue painted floor, which the eye reads as a carpet.

The hexagonal dining area in the lower turret got a double dose of brightness: royal blue on the ceiling and a floor of purple inlaid Marmoleum. “I think of it as a folly,” Mr. Cullum said. To make an explicit garden reference, the designers added an ornate late-19th-century light fixture with an iris motif (the irises reappear elsewhere in the house).

Ms. Lawrence didn’t expect all those colorful choices, but she embraced the results. Especially the purple floor. “It makes it all pop,” she said.

“The only thing I think she felt really strongly about was having those two front rooms be off-white, so they could be gallery spaces,” Mr. Cullum said. “We made them versatile for art shows.”

In one of the galleries, the pink sofas are on casters, so they can be easily moved; in the other, a decorative Italian bench with a brown zigzag pattern complements Ms. Lawrence’s own paintings hung salon-style above it.

And whereas in some hands an “eclectic” room is merely random, these designers know how to mix. A square, green marble fireplace surround in the living room that is almost Art Deco in its monumentality sets off a giltwood mirror and an Italian chest of drawers, both from the 19th century.

Reading nooks abound, as you might expect in a Narnia House. The basement has a cozy space with flocked wallpaper that is made private with a damask curtain. A second-floor niche contains a lantern covered in Fortuny fabric and embellished by fringe.

Above the garage, the Narnia Bedroom supports its theme with lions located in the base of a lamp as well as in a sketch hanging on the wall.

As for the wardrobe that is the house’s most idiosyncratic characteristic, “You go into a whole other world,” Ms. Lawrence said of stepping through the portal. “It’s quite an experience.”

In addition to being a psychologist, she is also a Freudian psychoanalyst, which helps explain “why I like myths so much,” she said.

Reports from overnight guests have been positive.

“The most recent guests were floored at how exciting it was to live in a house like that,” Ms. Lawrence said. “I haven’t slept there yet, but we probably will.”