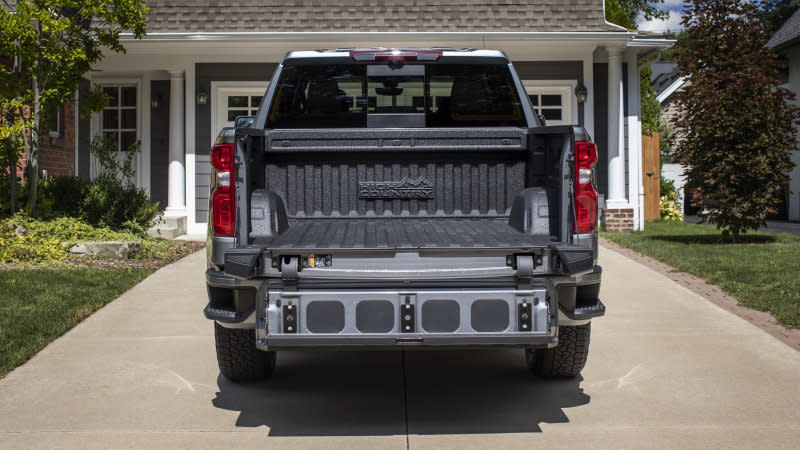 As promised, GM detailed the forthcoming updates to the 2021 Chevrolet Silverado pickup Monday morning, highlighting its adoption of a Chevy-branded variant of GMC’s MultiPro tailgate, dubbed “Multi-Flex.” And like the Sierra, the 2021 Silverado gets a handful of towing updates as well.

The trickling down of GMC’s exclusive tailgate was a bit of an inevitability, especially since the two pickups are fundamentally identical. With this shift may eliminate one of the more-premium Sierra’s sexier advantages, GMC does still have one feather in its cap: the outrageously cool (and somewhat outrageously priced) carbon fiber CarbonPro bed.

On the towing front, the biggest news is that both the 2.7-liter turbo-four and Duramax 3.0-liter turbodiesel engines had their towing capacities increased for 2021. Some variants of the 2.7-liter model saw their ratings go up by as much as 2,500 pounds; the diesel’s rating was increased by 1,900 pounds pretty much across the board.

“Chevrolet is confident these engines meet or exceed most trailering needs,” Chevy said in its announcement. “Additional testing and validation revealed the 2.7L Turbo possesses better-than-expected cooling performance, while the 3.0L Duramax improvements are attributed to the better-than-expected rear axle durability.”

Sweetening the deal even further, Chevy added a trailer length indicator to its lane-change camera, giving drivers a better idea of the space they’ll need to merge, and a new jack-knife alert system that tracks the angle of the trailer relative to the truck and alerts drivers if they are at risk of jack-knifing. A new cargo bed view with hitch guidance rounds out the 2021 additions.

Like the Sierra, the Silverado sees some options shuffled and repriced for 2021. Most notably, the Duramax option had its price slashed by $1,500. Combined with the aforementioned updates, this makes the 2021 Silverado an even more attractive proposition for customers who prioritize trailering.